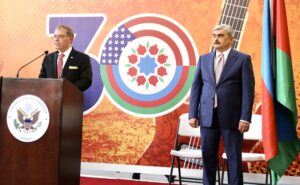 Ambassador Earle (Lee) Litzenberger and the U.S. Embassy in Baku this evening welcomed guests at a ceremony marking the 246th anniversary of the adoption of the U.S. Independence Declaration.  Attended by representatives of Azerbaijan’s government and civil society, as well as foreign diplomats and media, the annual 4th of July reception ceremony assembled guests in celebration of America’s values of freedom, liberty, and democracy as well as America’s rich historical and cultural heritage.

Consistent with the evening’s “Rock and Roll” theme, Azerbaijani Eurovision winner Eldar Gasimov started the festivities with stirring renditions of the American and Azerbaijani national anthems.

Formally launching the gathering, Ambassador Litzenberger told the guests, “Our Declaration of Independence on July 4, 1776 stands as a statement of fundamental freedoms that has defined the United States as a nation since that day and still inspires people around the world today.  We declared our independence in order to be free to exercise fundamental rights like the freedom to express our opinions, and the freedom from discrimination based on where someone is from, what language they speak, what religion they practice, or how they define their family.”  The Ambassador added, “We look to our government to secure and protect those rights for all citizens – including those who society has had difficulty accepting in the past.  We believe that the protection and the exercise of these freedoms allows us to realize our full potential as individuals, and as a society.”

Representing the Government of Azerbaijan as the Guest of Honor was H.E. Samir Sharifov, Minister of Finance, who delivered congratulations on the occasion of America’s Independence Day.

The 2022 Independence Day celebration coincided with the marking of the 30th anniversary of U.S. diplomatic relations with Azerbaijan, and the event underscored the Embassy’s commitment to cooperating with Azerbaijan in such areas as promoting European energy security, expanding bilateral trade and investment, and combating terrorism and transnational threats.  The Embassy is also proud to work with Azerbaijani organizations and individuals towards our shared goals of strengthening democracy, promoting Azerbaijan’s economic diversification, and achieving lasting peace and stability in the South Caucasus region.

The theme of this year’s event is the American roots of rock and roll, a genre of music that has helped to define the United States around the world.  In the 1960s and 70s, rock n’ roll was a symbol and engine of social change, a fundamental form of the freedom of expression.  Guests enjoyed a curated selection of rock and roll songs throughout the evening.  The quintessentially American art form provided both a backdrop and inspiration, as guests danced to the music of such artists as Chuck Berry, Prince, Madonna, Lady Gaga, and other musicians.

The U.S. Embassy also expresses its thanks to those companies and individuals that graciously donated to our Independence Day celebration.  Their support has been an invaluable part of our July 4th commemorations.