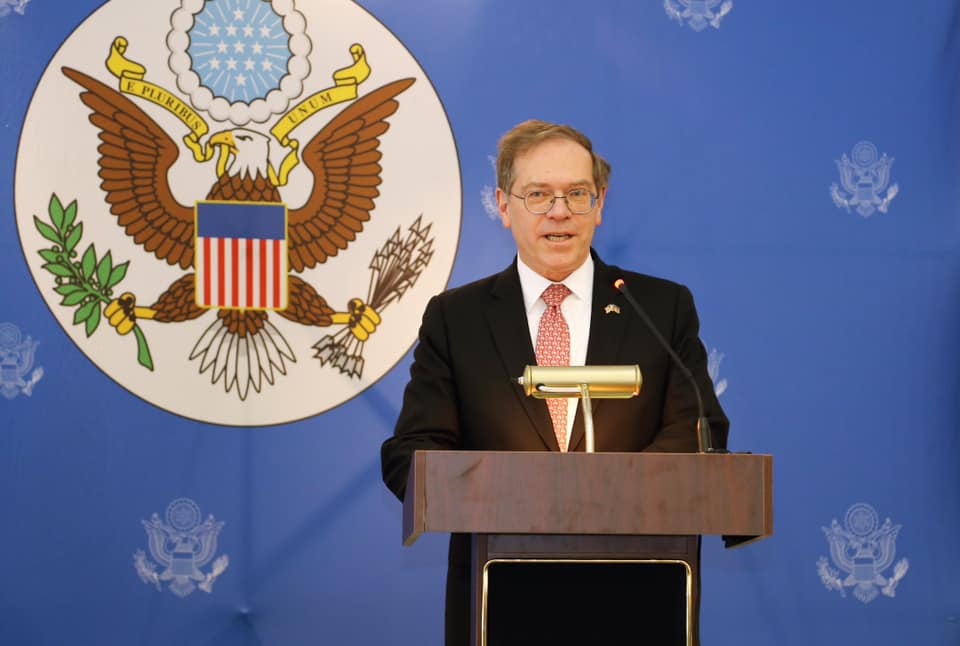 Baku, Azerbaijan — Thank you for the invitation to speak to this year’s Regional Energy Security Symposium.

We are now in the third year of this valuable event. I was pleased to address this forum last year and reinforce our commitments to Azerbaijan’s sovereignty, independence and contributions to European energy security.

I want to once again thank the Naval Postgraduate School, ADA University, SOCAR, and BP for their successful continued collaboration on these issues.

This has been a difficult year full of challenges unprecedented in their scope and scale. Nonetheless, the theme of this symposium, the intersection of energy and security, remains an important and relevant topic.

During my tenure as Deputy Chief of Mission at the United States Mission to NATO and as Senior Official in our Bureau of Political-Military Affairs, I saw firsthand the value of the work done by NATO via the Energy Security Center of Excellence and by our military post-graduate educational institutions in bringing energy security issues to the fore.

Our message has been clear and consistent: Azerbaijan’s role in supporting and contributing to European and global energy security and stability represents a sustained positive commitment and contribution we deeply value.

I want to emphasize a point: the United States has fully supported Azerbaijan’s independence, stability, and prosperity since its independence from the Soviet Union.

Throughout Azerbaijan’s history our bilateral relationship has rested on three common pillars: security cooperation, economic and energy cooperation, and support for human rights and the rule of law.

In the last two years, the United States approved $100 million for security assistance to Azerbaijan. Approximately half of that funding is being used on the Caspian Sea for surveillance equipment, small vessels, and training that will enhance security and the protection of maritime critical energy infrastructure.

The keystone of our economic and energy cooperation has been strong U.S. support for Azerbaijan’s efforts to secure export routes to world markets for its abundant energy resources, and thereby diversify Europe’s energy supply.

At the same time, the United States is cognizant of the fact that Azerbaijan is transitioning from mainly oil exports to a greater share of gas exports through the Southern Gas Corridor, supported by a more-diversified non-oil economy.

Our sustained support as champions of the Southern Gas Corridor builds on our successful role in supporting the Baku-Tbilisi-Ceyhan oil pipeline in the late 1990s, a project I am personally familiar with from my time during that period in Kazakhstan, when we were working to do something similar there.

American firms were here from the start, holding collectively the largest single share in the Contract of the Century, signed in 1994 to develop Azerbaijan’s abundant offshore energy resources, and we have continued to invest billions of dollars into Azerbaijan’s economic development.

This past year we celebrated the 25th anniversary of the signing of that contract, and rededicated ourselves to the work that remains ahead. Megaprojects like the Southern Gas Corridor are something unique in the geopolitical landscape. They cost tens of billions of dollars and permanently impact the lives of citizens thousands of miles away, requiring the successful interaction of a range of government and private sector actors over long periods of time.

The Southern Gas Corridor is of strategic importance both for the sovereignty and independence of the nations involved. It also contributes to the energy security of our allies and partners.

I want to reaffirm U.S. support for Azerbaijan and the companies involved in the Southern Gas Corridor.

This is the first east-west non-Russian gas export pipeline. Completion will bring Azerbaijan a significant step forward as a provider, not only of energy, but also security and stability to Europe.

Now that it is nearly completed we also need to look ahead to the future of the SGC, and think about opportunities to expand that flow of gas by forging links across the Caspian.

I want to turn specifically to the topic of energy security. The United States views energy security as national security, something that rings true here in the Caucasus just as it does in the rest of Europe and back home for us in North America.

Energy disruptions, when they occur, can have massive and detrimental effects. Technical malfunctions, natural disasters, sabotage, or decision making by a foreign energy supplier can all raise challenges.

This underscores the need for both critical infrastructure protection on the one hand, and on the other hand the need to foster a market-driven global gas market. Over the years, Azerbaijan has built impressively resilient energy infrastructure, together with its commercial and strategic partners.

Hardened infrastructure protects populations from potentially disastrous stress on economies and real-world threats to the lives of vulnerable populations. Free markets prevent countries from using gas for political purposes, and drive economic growth across the world.

As part of protecting Azerbaijan’s critical energy and cyber infrastructure, I have been calling for improving the effectiveness of intellectual property rights enforcement in Azerbaijan. We’ve been able to obtain a pledge from the American Chamber of Commerce that all member companies will use only licensed software. But more still needs to be done.

Cybersecurity remains a key component of energy infrastructure security, and I would note this is an area in which the United States continues to invest heavily.

We strongly urge Azerbaijan to make this a priority and take the same measures, firstly by ensuring IP rights are respected, and secondly by hardening their systems to potential attacks from malign actors.

Let me close by saying Azerbaijan’s energy sector development has transformed this country, and leaders and policymakers have navigated a complex neighborhood and fluctuating fortunes in global energy markets to reach where we are today.

The United States stands ready to continue to support Azerbaijan’s further development as a reliable supplier of energy to the world. I hope that you all can reflect on your discussions of the past week to make your own contribution to this goal.