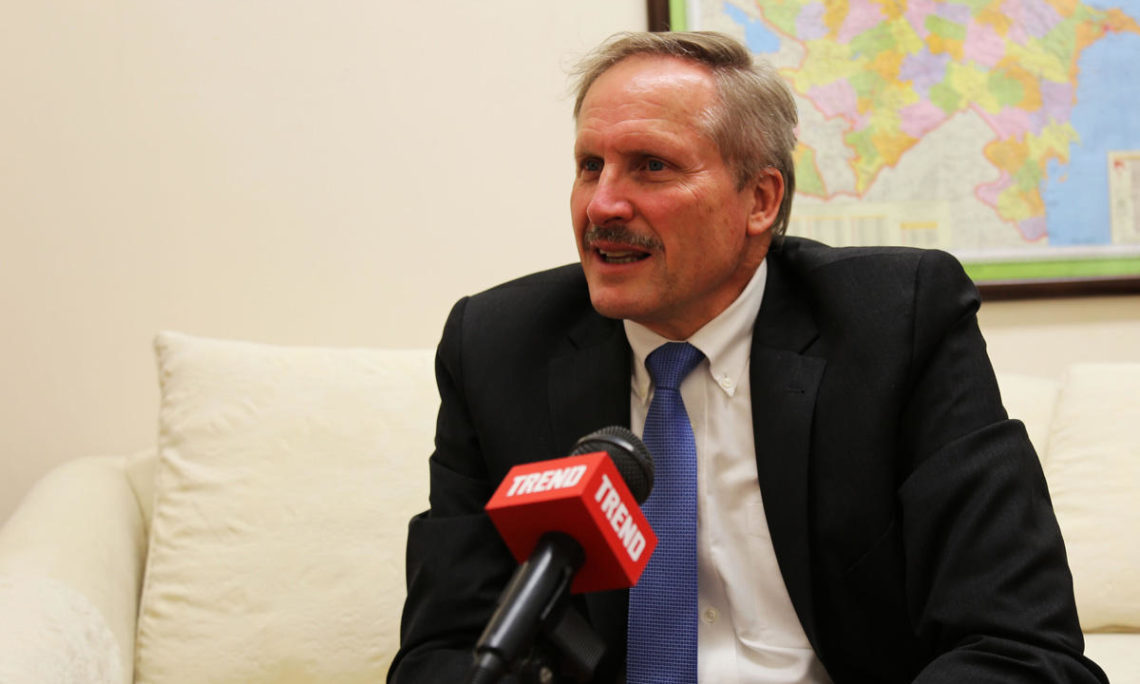 The relationship between Azerbaijan and the U.S. has really been improving, and the parties are working together in many areas, Robert Cekuta, the U.S. Ambassador to Azerbaijan, told Trend in an exclusive interview on the occasion of the 25th anniversary of the establishment of diplomatic relations.

“For the U.S., our focus in Azerbaijan is a strong, stable, independent, prosperous, democratic country. We have worked together in three equally important areas to help realize that: security, and energy and economics, and democracy and human rights. All three are related, and I think all three are equally important to making this country that the country Azerbaijan wants to be,” Ambassador Cekuta said.

The Ambassador noted there are many things Azerbaijan and the United States can work on together, but cooperation in energy security and fighting terrorism have great strategic importance that goes well beyond just two countries.

“Azerbaijan is a country that has significant energy resources and has played, continues to play and, I think, will continue to play an important part in developing Europe’s energy security and maintaining the ability of countries to have different sources of supply. It makes those countries able to stand up to outside pressures better. So that is an important role Azerbaijan plays,” Ambassador Cekuta said.

The Ambassador stressed that Azerbaijan is also important in fighting terrorism and violent extremism, and that the U.S. and Azerbaijan have worked together and continue to work in Afghanistan, with Azerbaijan playing an important role as a transit route between the West and Afghanistan.

Ambassador Cekuta also noted there are good prospects for cooperation in the transport sector.

“Azerbaijan’s geography is key, and the role that Azerbaijan plays as East-West and North-South corridor is going to continue to grow. I look at the importance of this in terms of trade between East Asia and Europe and also between South Asia and rest of Europe,” the Ambassador said.

According to Ambassador Cekuta, there is also potential for economic engagement between the U.S. and Azerbaijan, including new enterprises and new economic activities in Azerbaijan.

“It is something we look at as a positive aspect of Azerbaijan’s efforts to grow, to diversify its economy, to become stronger player in the region,” he said.

Cooperation on the Southern Gas Corridor

The U.S. continues to strongly support the Southern Gas Corridor due to the positive role it can play in European energy security, Cekuta said.

Speaking about the possibility of funding of the project by American financial institutions, he noted that those sorts of decisions are commercial, and they are made by the banks themselves. However, Ambassador Cekuta said the US is working on this issue as a part of its engagement with Azerbaijan.

According to the Ambassador, what can be done is to help Azerbaijan be more competitive, and to work on this area broadly in terms of economics.

“It is a very competitive world out there, in terms of being able to get financing, and being able to capture international financial attention. And so, we work with Azerbaijan to create conditions that will make it a more attractive business partner,” he said.

According to the Ambassador, those conditions are fighting corruption, boosting transparency, engaging in rule of law.

“These sorts of things are things banks are looking out for. And these are things we want to work on with Azerbaijan. We have been working with Azerbaijan to make it more competitive in terms of its dealings with international financial institutions,” he said.

Settlement of the Nagorno-Karabakh conflict

Peaceful negotiation is essential for the settlement of the Armenian-Azerbaijani Nagorno-Karabakh conflict, Cekuta stressed.

“There is no military solution for this conflict. It is essential that the parties come together and work towards finding a peaceful settlement to this conflict. This conflict has gone on for too long,” he said.

The Ambassador noted that the United States works through the OSCE Minsk Group and is very active in this work, helping the parties come together to find the settlement.

“We have to help the parties move forward,” he said.

According to the Ambassador, Hoagland has already engaged with his partners – the French and Russian Co-Chairs – to look at the situation, engage with people, help bring the parties together and help them realize a peaceful settlement.

“He is a very energetic and very strong player, and I think he can really help to move this process ahead,” Cekuta said.

Answering the question about Armenia’s frequent provocations against Azerbaijan along the contact line and border, the Ambassador stressed again that there is no military solution to this conflict.

“Violence does not help anyone. It is really important for the parties to come together to find a way forward, to achieve a peaceful settlement. This is something that is important to all people in the region,” he said.

Cekuta noted that when he travels around the country he meets with IDPs and sees the effect the conflict has on people. Meanwhile his colleagues on the other side of the contact line see the same thing, he said.

“We need to do what can to help move things forward, to help the parties to reach a settlement,” he said, adding that the parties of the conflict need to have the political will to move forward, but the U.S. can help this process.

Ambassador Cekuta said that one thing Americans should know about Azerbaijan is the country’s tradition of not just religious tolerance but religious acceptance. He added that Azerbaijan, a secular Muslim Shia state, is a good example of tolerance and acceptance of people of different faiths living together.

“It can provide an example that others can use on their own efforts to turn people away from terrorism and violent extremism,” Ambassador Cekuta said.

The Ambassador recalled that last September, an Azerbaijani who had immigrated to the United States commissioned the writing of a new Torah for a synagogue here in Baku, and a delegation from Brooklyn came to attend the event.

“And they were really impressed to see this presentation of a Torah in a Muslim country. This is an amazing thing to many Americans. This is an example to all countries in the world,” he said.

Ambassador Cekuta also noted that the U.S. has had 500 Peace Corp volunteers in Azerbaijan over the years, who worked on English language training and community development. He stressed that these volunteers are the best Ambassadors of Azerbaijan in the United States.

“There was a group [of Peace Corp volunteers] when I was in Washington in March. And they still follow developments here, they are interested in Azerbaijan, they tell their friends and families about Azerbaijan, they come back to Azerbaijan for Azerbaijani weddings. It really builds relationships,” he said.

The Ambassador stressed that relationships such as these between people are truly important for building strong ties.

“I think that there are a lot of things Americans can learn about Azerbaijan, that Azerbaijan can teach them,” he said.

The Ambassador also noted that Azerbaijan is an interesting tourism destination, and he travels a lot around the country.

“I enjoy going out and seeing the mountains, the nature, the variety in this country . . . It is fun to see the country, to see historical places, to see the nature, go to farms, eat different foods,” he said.

Ambassador Cekuta also noted his family has come to Azerbaijan for Christmas both years he has served in Baku and they also enjoyed their vacations here. His youngest son even brought his friends from University last Christmas.