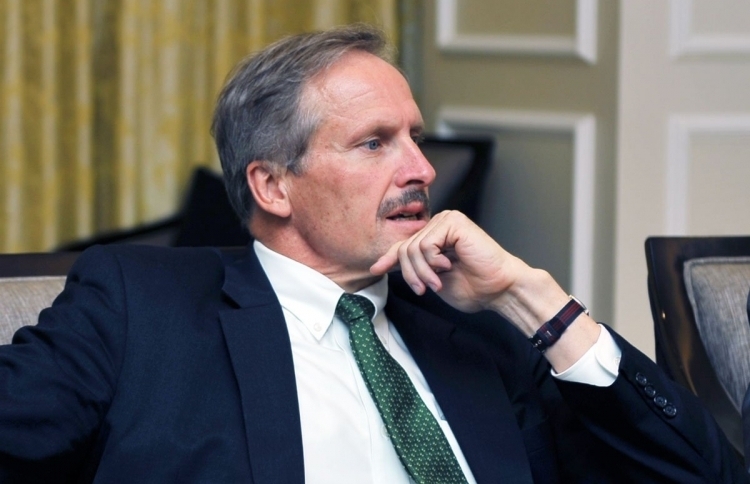 Mr. Ambassador you have discussed at your last meeting with Azerbaijan’s Energy Minister Natig Aliyev the Offshore Technology Conference (OTC) to be held in Houston early May, noting that the event was an important platform for energy experts to exchange ideas in order to improve their scientific-technical knowledge on environmental issues. You also noted the importance of Azerbaijani SOCAR’s participation at the conference. How much interest does Azerbaijan have in this conference?

The OTC is one of the biggest, most important events for the world’s oil and gas industry and as an important actor in the oil and gas sector, it’s important, I might even say essential that Azerbaijan be in Houston for it. The world’s newest technologies are on display there. The world’s major companies are there. Given the history, the scope, the innovations going on here in Azerbaijan’s oil and gas sector, I’m glad Minister Aliyev and 10 Azerbaijani companies decided this year to attend OTC. I should also add that Houston and Baku are sister cities, which makes it all the more appropriate that an Azerbaijani delegation joined the nearly 60,000 people who are expected to attend OTC this year. Ambassador Suleymanov and his team at the Azerbaijan Embassy in Washington also worked with us to support the delegation.

I was pleased and honored to share the stage at a number of events with Energy Minister Aliyev and representatives of leading international energy companies to talk about the sector, about the Southern Gas Corridor and its importance for Azerbaijan’s development and prosperity, and how the United States and Azerbaijan have worked together over the last two decades to increase European and global energy security.

After Donald Trump’s election as the U.S. President, some circles began to speculate that he was going to reconsider U.S. policy towards Europe. Azerbaijan, too, is interested in this issue as a key member country of the Southern Gas Corridor project. My question is, is there any change in the U.S. policy with regard to the Southern Gas Corridor project?

The United States has been supporting the development of Azerbaijan’s energy sector for over two decades. This has been the policy of Presidents of both parties. I would also note the points Secretary Tillerson made to the February meeting of the Southern Gas Corridor Advisory Council here in Baku. He mentioned that Azerbaijan has played a key role in our shared strategic goal of diversifying regional energy supplies, increasing market competition, and strengthening European Energy security. Also, that the Southern Gas Corridor, which will provide new supplies of gas from the Caspian to the rest of Europe, is a critical project for European energy diversification. He noted too that the United States remains committed to the project, along with all the governments and companies involved in it, to ensure its completion.

We talked about your meeting with the Energy Minister. Did the Minister inform you on the certain challenges surrounding the implementation of the Southern Gas Corridor project? To sum up, there are still some difficulties in connection with the implementation of the TAP project in Italy. The minister in his speech expressed his concern about possible effects these problems could have on the timely realization of the South Gas Corridor project. What are the causes of these problems? Could the U.S. make any contributions to the effort to resolve these problems?

This is a remarkable project. With a price tag of about $40 billion, the Southern Gas Corridor is one of the largest infrastructure projects underway in the world today. It is also one that is addressing some impressive technical challenges. Further, it is one where things in Azerbaijan, along the new pipeline across Georgia to Turkey, and in the construction of the new pipeline in Turkey across Anatolia are coming to completion. Work is also proceeding in Greece and Albania on the Trans Adriatic Pipeline, or “TAP”, and we’re seeing work being done now in Italy on TAP as well.

Azerbaijan’s President in one of his speeches noted that “some external forces are trying to delay the implementation of the Southern Gas Corridor.” To what extent do you think these forces may effect on this project?

It’s important that gas from the Caspian is able to reach Europe without external interference. Safe, secure sources of energy are key to a country’s prosperity and security. As I noted earlier, the Southern Gas Corridor is progressing well with the expertise and support of all the companies and governments involved.