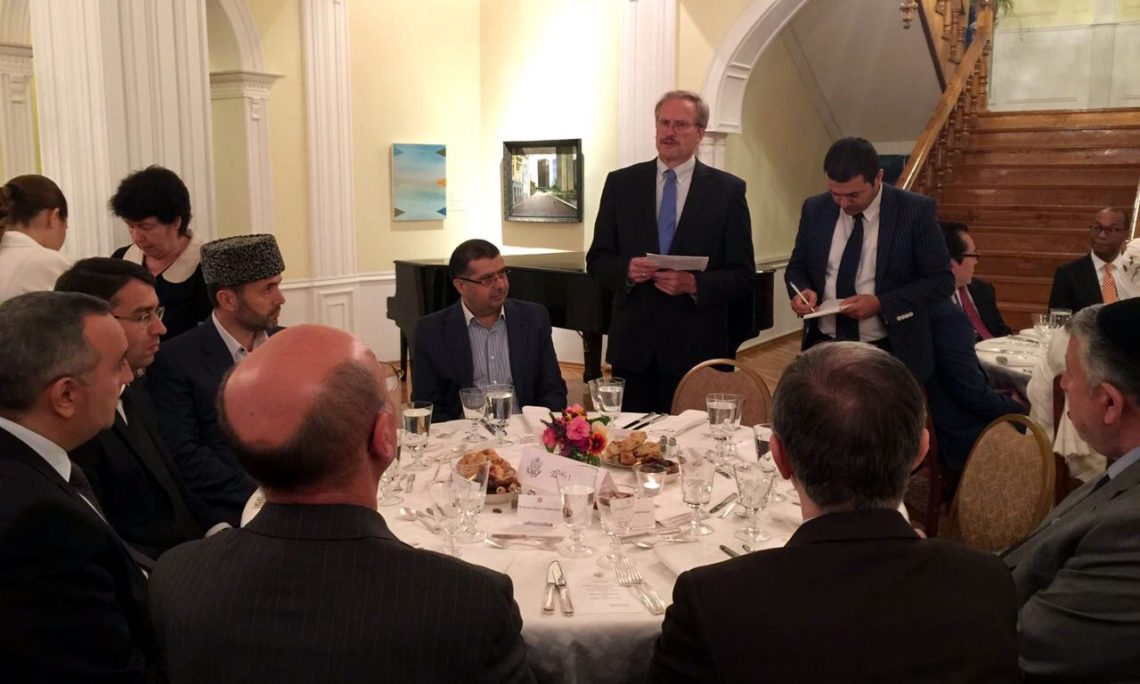 As-salaam-u-alaikum.  I am very pleased to welcome you to the Residence for tonight’s Iftar.  It is an honor to host you.

I would like to welcome all of the distinguished religious leaders, government officials, and diplomatic colleagues, and I especially want to acknowledge Rashad Aliyarli, from the Caucasus Muslim Board who is with us this evening.

My sons and I are glad to be with you tonight to celebrate Ramadan, the holiest month of the Muslim calendar year.  It is a time for peaceful reflection and for prayer.  It is a time for acts of compassion and charity.  Islam has a long history in the United States, and American Presidents have long shown their regard and esteem for Islamic traditions.  Thomas Jefferson hosted a White House Iftar in 1805 for the Ambassador of Tunisia, who was the first Muslim Ambassador to the United States.  That was over 200 years ago, when our country was just taking its first steps in the world.  Thus, Iftars have been a tradition in the United States, with many Presidents and Secretaries of State, as well as our missions abroad, hosting them annually as a sign of respect and togetherness.

Iftars demonstrate the unity of Islam; they underline the value Islam places on brotherhood and peace.  In the United States there are millions of Muslims from all over the world.  That fact about the United States is evident in the different foods and traditions exhibited by Moslem Americans during the holy month of Ramadhan.  This fact was recently celebrated, for example, in some articles in the New York Times talking about what West African, Pakistani, Persian, Middle Eastern, and other dishes are served at Iftars in the United States.  Iftars are therefore celebrated with many different foods and traditions, but the central spirit of Ramadan is shared by all.

Azerbaijan also has a rich history of multiculturalism and acceptance, a history of which Azerbaijanis are justifiably proud, and a tradition that the world needs to see shared more widely.  But tolerance doesn’t happen on its own; we have to actively and continuously pursue it.  Traditions need to be taught and reinforced, including with our children.  The diversity of Azerbaijan’s religious communities is a source of strength, and I am glad when I see this country nurturing that diversity.

There are divisions in the world today, but we must remember we are all part of one family.  The holy month of Ramadan is a time for a reaffirmation of the ideals that bind us all together, no matter what our faith:  peace, charity, and forgiveness.

Thank you for coming to our Iftar this evening, I hope you enjoy the meal.