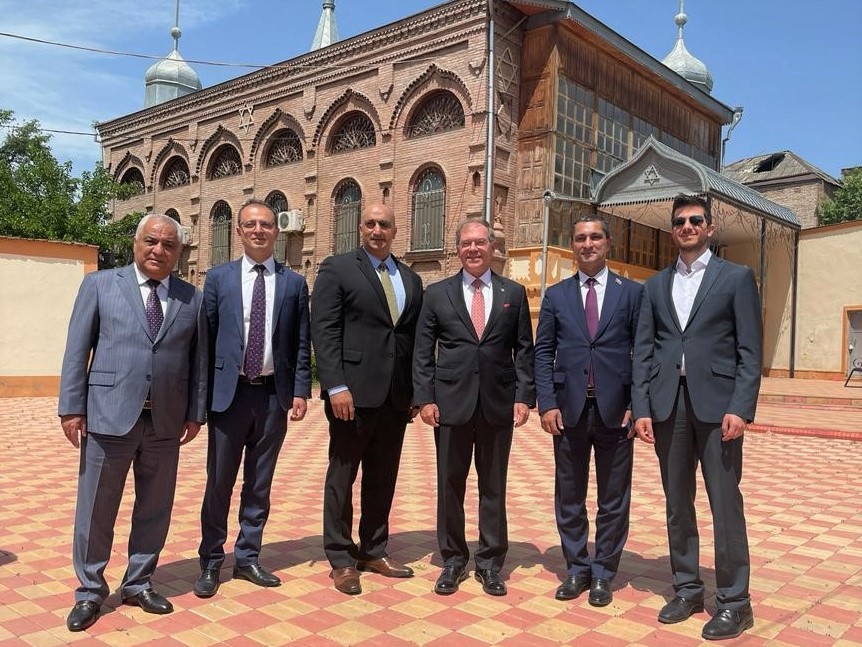 U.S. Ambassador Earle (Lee) Litzenberger and Israeli Ambassador George Deek visited Red Village in Quba region to launch a joint project with the Mountain Jews Heritage Union and Heydar Aliyev Foundation.  This project will support cultural tourism in the historic center of the Mountain Jew community.  The new initiative will entail the restoration and equipping of a traditional Jewish house to serve as both a museum and café, providing visitors with a chance to tour a typical home in this unique community and enjoy traditional local cuisine.

Igor Shaulov, Director of the Mountain Jews Heritage Union, MP Soltan Mammadov representing from the Heydar Aliyev Foundation, and the Quba Executive Committee joined the event and participated in the ceremonial ribbon-cutting of the site’s restoration work.

Ambassador Litzenberger noted, “by renovating and furnishing this traditional home, the United States will help complement the local points of interest offered by the nearby Mountain Jews Museum, synagogue, and ancient cemetery.  Building on Azerbaijan’s strong tradition of multiculturalism, this project will strengthen local cultural traditions and expand awareness of this community’s culture and history.  At the same time, support for this development will help increase local incomes by increasing tourism.”

According to Ambassador Deek, ““The tradition of the Jewish community of Azerbaijan is rich and deep. Today is a special day. Israel – the Jewish state, the USA – the country with the largest Jewish diaspora in the world, and Azerbaijan – the home to the largest Jewish community in the Muslim-majority world, are joining hands to create a place that will honor the mountainous Jewish tradition. This joint project will reflect the peace and co-existence which Jews in Azerbaijan enjoy, and will allow foreigners the opportunity to learn about the local culture and traditions.”

The U.S. contribution to the project is being provided by the Azerbaijan Mission of the U.S. Agency for International Development (USAID) through its Private Sector Activity (PSA).  Since 1998, USAID has provided significant co-investment in private sector development in the country with special focus on the agriculture and tourism sectors.  Additional support for the project will be provided by the Israeli Embassy, the Heydar Aliyev Foundation, and the local Mountain Jews Heritage Union non-governmental organization.