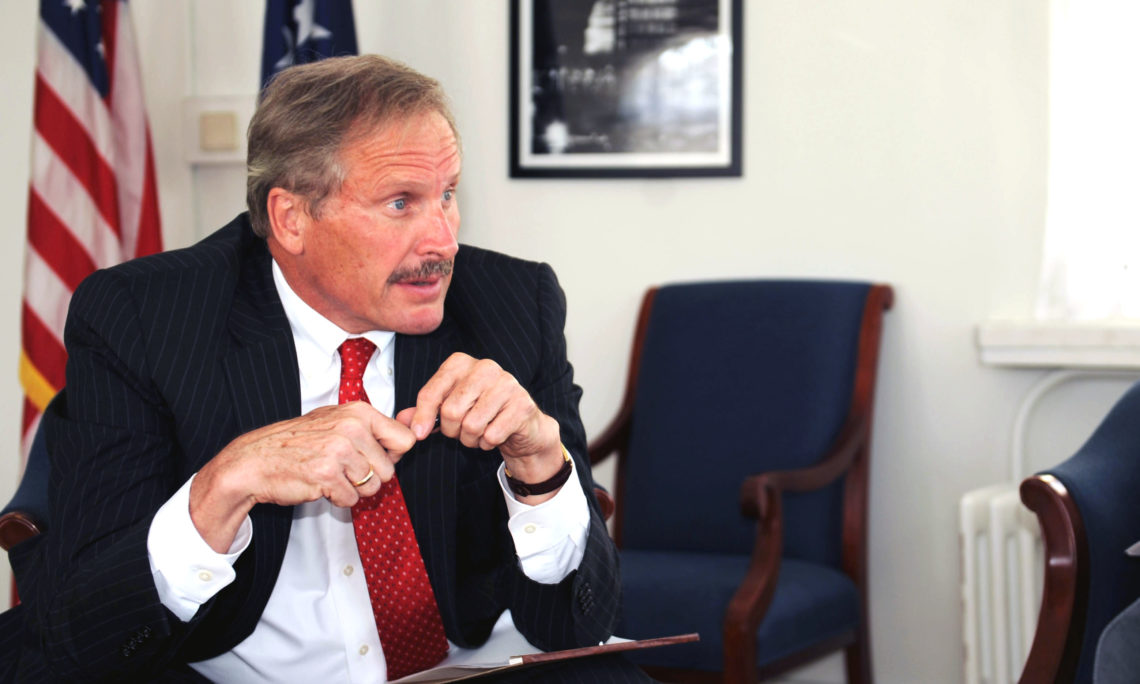 Thank you Natavan Xanim, thank you Nuran, and thanks too to all the members of American Chamber of Commerce in Azerbaijan for inviting me to speak today.  It was over three years ago that I spoke to this group in my first speech in Azerbaijan and there is no better venue for me to make my last speech as I conclude my time as U.S. Ambassador to Azerbaijan.

All of us can be proud of what has been accomplished over those three years.  I can list a number of major contracts, including over $3 billion in Boeing sales, the contract for Azerbaijan’s second communications satellite worth over $200 million, and the extension of the ACG Production Sharing Agreement which includes among its parties ExxonMobil and Chevron.  There have been three trade missions from the United States as well as groups of Azerbaijani business people going to the U.S., including the group the late Energy Minister, Natig Aliyev – Allah rəhmət eləsin – and I took last year to Houston, Baku’s sister city, to one of the world’s largest oil and gas industry trade fairs, the Offshore Technology Conference.

There has also been the successful revival of U.S. programs to help train women, young people, and others in Azerbaijan on how to be entrepreneurs.  We saw Azerbaijani women on the international stage, including Reyhan Jamalova who was recognized by Ivanka Trump, for their creativity and innovations.  There are the many important contributions this Chamber has made, including through its White Papers, to improving the business climate in Azerbaijan, to fostering dialogue between the Azerbaijan government and businesses and consumers, to helping both expand the scope of our bilateral relationship and helping make Azerbaijan a more prosperous, stable country.

But something I learned years ago, is that with every success comes new challenges.  I was in Washington in 1999 when the conflict with Serbia over the situation in Kosovo broke out.  I remember the day the fighting stopped and the Assistant Secretary of State for Europe called all of us into his office for a glass of champagne to celebrate.  After his congratulatory remarks and a few minutes of camaraderie and toasts, we went back to our offices to start the work of pulling together a process to build a lasting peace, to develop the plans for a donors’ conference, to take on the work of building stability in what was in the 1990s a region many thought was trapped in an endless cycle of conflict and instability.

So as I leave Azerbaijan and while I can say I have seen measurable improvements in the U.S./Azerbaijan relationship, I feel it is necessary to sketch out a few points regarding what needs to continue to be addressed, where new challenges may be arising.

Let me begin with geography.  When Governor John Sununu, who was also President George H.W. Bush’s Chief of Staff, talks about Azerbaijan, he notes the key point Americans make when talking about what is really important in real estate: location, location, location.  The only country in the world that borders both Russia and Iran, Azerbaijan has been ruled by both and can feel the impacts of policies developed in Moscow and Tehran.  Yet this geopolitical reality with all of its challenges, is something that gives Azerbaijan opportunities as well as an international importance.

Because of this geography, Azerbaijan is a critical component of the Northern Distribution Network, a vital air and surface transport channel providing access into and out of Afghanistan.  Likewise, while Azerbaijan’s oil and gas deposits are important in and of themselves, the country’s geography means it – along with Georgia and Turkey – is key in moving those deposits out to Europe and the rest of the world, to boosting regional and global energy security, to moving oil and gas from this country and beyond in a way that ensures an alternative to routes moving through Russia or Iran.

But while Azerbaijan has been and will continue to be strategically important for these reasons, other factors are raising Azerbaijan’s international profile.  The opening of the Baku-Tbilisi-Kars railroad and the development of the new port at Alat south of Baku, for example, are both key components of the New Silk Road and factors that have the potential to improve and expand trade between the western and the eastern and southern portions of Eurasia.  At a conference earlier in March, speakers noted the new transport facilities will drop shipping times from 35 days between China and Western Europe to 10-15.  The new facilities also offer improved access between India and other south Asian markets and Western Europe.

Azerbaijan is strategically important in other ways as well.  Long a reliable international partner on the ground in Afghanistan, Azerbaijan has an important role to play in showing the world an example of a secular Muslim state, showing an example of inter-ethnic and inter-religious tolerance in days when extremism and terrorism are global problems and threats to us all.

We also note and celebrate another aspect of Azerbaijan’s rich history this year with the centennial of the Azerbaijan Democratic Republic, and what it set out as the first modern Muslim democracy and the first Muslim country to recognize women’s right to vote and participate in the legislature and government.  However, we also need to note the persistent conflict over Nagorno-Karabakh and the need to help realize a peaceful settlement based upon internationally agreed-upon principles.

On the business side of the ledger there are opportunities as well.  Azerbaijanis will often characterize themselves a “small country.”  Yet with a population of ten million, it is twice the size of Norway or about the size of Austria or Sweden.  My point here is that we should not see the size of Azerbaijan’s economy as a limiting factor, but note what it signifies in the way of potential.

Azerbaijan’s oil and gas deposits have been a source of wealth and can continue to be so.  Certainly Azerbaijan needs to continue an aggressive effort to diversify its economy – again, look at Baku’s sister city Houston which diversified its economy after oil prices crashed in the eighties and which, as a result, weathered the drop in oil prices that began in June, 2014.

But I am convinced that like the Permian Basin, Pennsylvania, and other long-established oil and gas provinces in the United States that have seen tremendous upswings in productivity in recent years due to the development and application of new technologies, upswings so great that the International Energy Agency and others forecast the U.S. is on the road to being once again the world’s largest oil producer, there is still further potential for Azerbaijan as an oil and gas producer.  Moreover, I continue to see this area as one with significant potential for U.S. firms.

There is another challenge I need to note, however, and it is one that has long kept U.S./Azerbaijan relations from reaching the level both governments have repeatedly said they want.  This challenge is that of strengthening the rule of law, further fighting corruption, of addressing other important questions of governance.  Initiatives such as ASAN and other reforms show Azerbaijan has been making important progress in the fight against corruption, but this effort needs to deepen and continue.  Likewise, efforts to ensure fair treatment by the judiciary along with measures to improve the predictability and transparency in the way ministries and other government agencies develop and implement regulations are essential to keeping and attracting further business investment in today’s competitive world.

Moreover, it is important that Azerbaijanis feel they have the freedom to create and realize new ideas, to invent, to become entrepreneurs and realize the fruits of their creativity.  These entrepreneurs also need access to capital and an ecosystem – such as strong legal protection for that creativity, for intellectual property rights, for example – to create businesses, and see them grow, and thus foster increased jobs, exports, and prosperity.

These have been some final thoughts and impressions from my three years as U.S. Ambassador to Azerbaijan.  As I noted, there have been many important successes during those three years, but those successes are just some of the steps along the road to see this country be the stable, independent, democratic, and prosperous country its people want it to be.

I wish all you every success in that effort and please know that I, and everyone in my family who have come to know and appreciate Azerbaijan will support you in that effort.