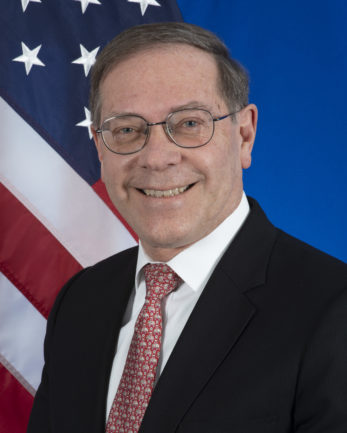 Lee Litzenberger, a career member of the Senior Foreign Service, class of Minister Counselor, was confirmed by the U.S. Senate January 2, 2019 as U.S. Ambassador to Azerbaijan.

Ambassador Litzenberger served previously as Senior Advisor and Senior Bureau Official in the Department of State’s Bureau of Political-Military Affairs. He also has served as Deputy Chief of Mission at the U.S. Mission to NATO, Brussels (2014-2017), the U.S. Embassy in Belgrade, Serbia (2010-2013), and the U.S. Embassy in Bishkek, Kyrgyzstan (2006-2009). He was the NATO Deputy Senior Civilian Representative in Kabul, Afghanistan (2013-2014).

Ambassador Litzenberger’s other overseas assignments include the U.S. Mission to the European Union, Brussels, and the U.S. Embassies in Kazakhstan, Bulgaria, and Algeria, as well as the U.S. Consulate General in Marseille, France. He has held several other positions at the Department of State in Washington, DC, including in the Office of the Deputy Secretary, and as State Department Senior Fellow at the German Marshall Fund.

Ambassador Litzenberger holds a B.A. in History from Middlebury College and an M.S. in Strategic Studies from the U.S. Army War College. He speaks French, Russian, Bulgarian, and Serbo-Croatian. He is married and has two grown children, and two grandchildren.