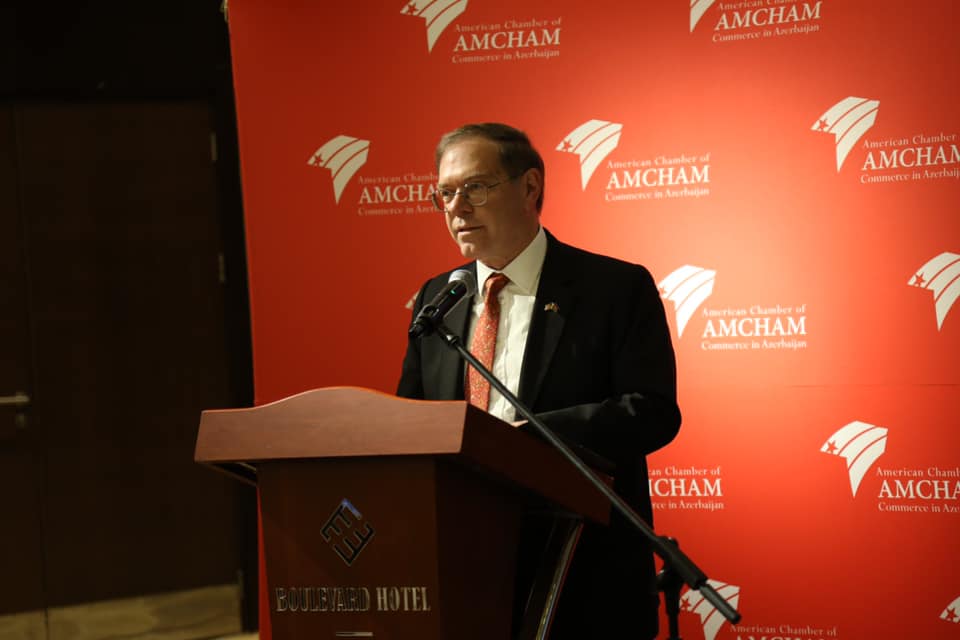 Thank you, Nuran, for that very kind introduction.  And thank you very much for the opportunity to speak to so many of Azerbaijan’s business leaders gathered in one place.

AmCham has long been a key partner of the U.S. Embassy, serving as the voice of the business community and working to advance our shared vision of a prosperous, stable, and globally-integrated Azerbaijan.  It’s an honor for me to speak to you all today.

As you probably know, I arrived in Baku just three weeks ago.  Although I’m still quite new to the country, I can’t help but feel optimistic about the opportunities ahead.  On my second day at work, I presented my credentials to President Aliyev and we had a warm and open discussion on the strength of U.S-Azerbaijan relations and the ways in which we can advance them even further.

Since then, I’ve met with many government officials, civil society members, and business leaders.  I’ve also gotten to know the dedicated team of Americans and Azerbaijanis working at the U.S. Embassy.

All of this has shown me that our bilateral relationship is based on a solid foundation and benefits from the dedication of people in both our countries who are committed to strengthening it.  I would like to take a brief moment to recognize one of those people, whom you all certainly know well.

Deputy Chief of Mission William Gill has done an excellent job as Chargé d’Affaires at the U.S. Embassy this past year, as well as a member of the AmCham Board since 2016.  Thank you very much, Will, for your tireless dedication to improving the ties between the United States and to Azerbaijan.

Will’s work is just one example of the United States’ decades-long engagement in Azerbaijan.  In addition, I am also excited that Will encouraged and supported USAID’s Mission Director Jay Singh to engage with AmCham as a key partner in his forward-leaning private sector strategy.  Let me recognize Jay for his role in deepening this engagement.

The United States has been here since the beginning; we have stood shoulder to shoulder with the Azerbaijani people for 27 years to help you maintain your independence and sovereignty, expand and diversify your economy, and develop democratically.

Since 1992, the U.S. government has provided over $1.3 billion in assistance through programs supporting humanitarian relief, economic development, the rule of law, and much more.

Over 6,000 Azerbaijanis have traveled to the United States on U.S.-government sponsored exchange programs.  These alumni now occupy leading positions in your government, civil society, the private sector, and, of course, AmCham.

These programs are born from our belief that a stable and prosperous Azerbaijan is essential for advancing our common goals of stability and prosperity throughout the region and across the globe.  We believe your success and our success are mutually reinforcing.

And I believe that everyone in this room has an important role to play in achieving that success.  A dynamic and engaged business community in a vibrant and open private sector is the only way to compete effectively in the global economy.

Although much work remains to be done, there is a great deal to be proud of.

One area of unquestioned economic success for Azerbaijan has been in the energy sector.  Caspian energy resources have not only enriched Azerbaijan, but also helped it play an important role in Europe.

The Southern Gas Corridor is not only an important project for Azerbaijan, it is also a key component to guaranteeing the political and energy security of Europe.  Just as the United States played a critical role in supporting the Baku-Tbilisi-Ceyhan pipeline in the late 1990s, we will continue to support the Azerbaijani government and its private sector partners to ensure the completion of the Southern Gas Corridor.

However, Azerbaijan’s leadership has recognized that even though oil and gas are important, the Azerbaijani economy needs to diversify away from its dependence on hydrocarbons.

We support the government’s stated goal to have multiple, sustainable sources of revenue; new opportunities for investment; and a creative, innovative cadre of entrepreneurs working in an open economy to boost economic growth and prosperity.  The U.S. can play an important role in this effort.

In support of these economic diversification efforts, the United States Agency for International Development – USAID – has invested resources and technical expertise in Azerbaijan’s farmers to accelerate agricultural sector growth.  USAID has also invested in youth and women to promote small business development and increase economic participation.

Next week, USAID is also sponsoring the first ever Illinois-Azerbaijan Agricultural Forum in Chicago, facilitating linkages and investment opportunities between American and Azerbaijani companies to further advance the sector.

We are encouraged by the significant steps the government has taken to reform the State Customs Committee, the tax system, and the delivery of government services through the ASAN service centers.  These reforms send an important signal that Azerbaijan is interested in creating a welcoming and attractive investment climate.

AmCham has played an important part in this process.  Your biennial White Paper has proven to be an excellent way for the business community to have an open dialogue with the government.  That conversation has been fruitful, and I believe it will continue to be so in the future.  And you can count on the continued support of the U.S. Embassy for AmCham.

These positive steps, however, are just the first in a journey that must continue.

The global economy is large, and it is very competitive.  Every country in the world is fighting to attract foreign investment and to develop industries that create jobs and exports.

Ultimately, U.S. companies want to invest in markets in which they can compete on a level playing field and know that their investments will be protected by the rule of law.

At a fundamental level, foreign investors want to know that they will receive a fair price for the goods and services they sell and that their innovations are protected.

Another issue is Azerbaijan’s lack of integration into the global trading system.  Opening your market brings with it benefits that far outweigh the challenges of integrating with the global economy.

We support a clear and sustained effort by Azerbaijan to accede to the World Trade Organization as one of the best ways to realize the goals of economic diversification and attracting foreign investment.

U.S. companies also want to work in truly free and transparent markets.  Economies that are dominated by a handful of individuals or entities will struggle to attract foreign investment and produce the entrepreneurs that make any economy truly dynamic.

Most importantly, U.S. companies want to work in environments that respect and celebrate the rule of law.  Azerbaijan has made remarkable progress in adopting reforms in recent years, as demonstrated by its improvement in the World Bank’s “Doing Business” Report.

Ensuring that these reforms are properly applied requires predictability and transparency in the way an independent judiciary reaches decisions and government agencies implement regulations.

I see great potential for deepening economic ties between Azerbaijan and the United States, and indeed the rest of the world.  From my initial discussions with Azerbaijani officials and business leaders, I know I am not alone in this optimism.

The U.S. Embassy will remain a committed partner in strengthening those ties through our assistance, our advocacy, and our people-to-people exchanges.  Of course, while we will continue to do our part, much of the work falls on those in this room.

A healthy private sector is the foundation of a healthy economy.  As the premier business organization in Azerbaijan, AmCham is in a better position than anyone else to innovate, promote job creation, build business ties, and advocate for additional necessary reforms to strengthen Azerbaijan’s competitiveness to attract new investments.

I look forward to working with the AmCham Board of Directors, the Executive Director and her capable staff, and the entire AmCham membership to deepen ties between our two countries and promote prosperity in Azerbaijan.