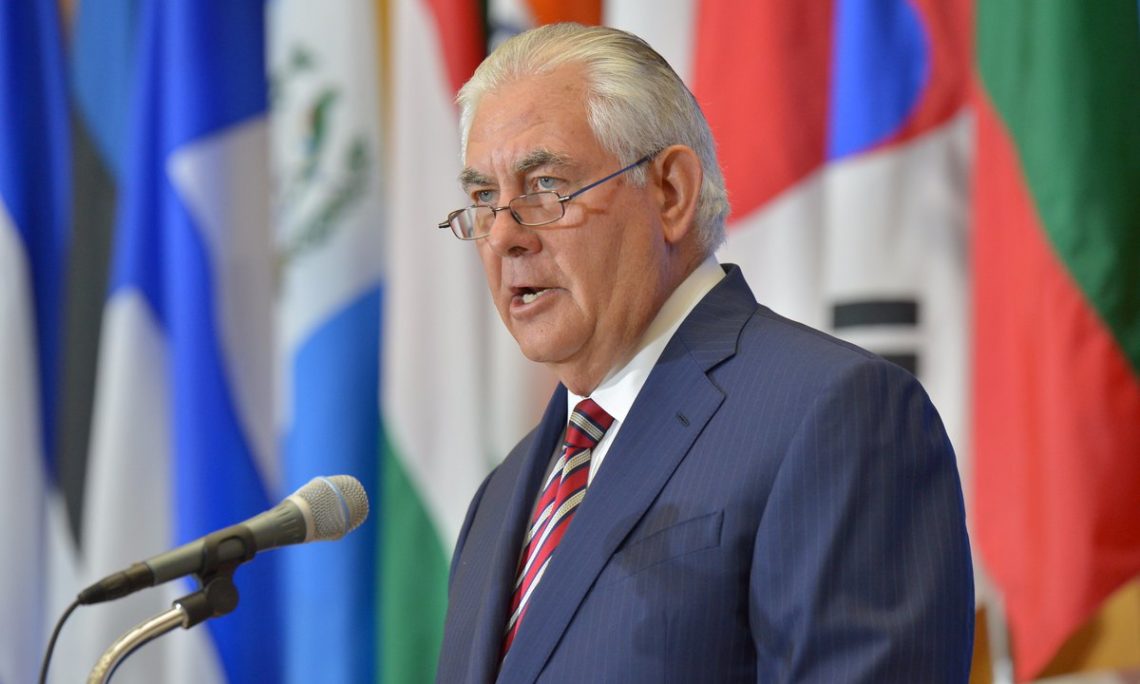 SECRETARY TILLERSON: Again, I want to thank Foreign Minister Le Drian for hosting today’s signing ceremony for the launch of the International Partnership Against Impunity for the Use of Chemical Weapons.

This meeting was about two things: stopping chemical weapons attacks and denying impunity to those who use or enable the use of such weapons. For an indication of what these weapons can do to humans, one need look no further than East Ghouta in Syria. Only yesterday more than 20 civilians, most of them children, were victims of an apparent chlorine gas attack.

The recent attacks in East Ghouta raise serious concerns that Bashar al-Assad’s Syrian regime may be continuing its use of chemical weapons against its own people. Whoever conducted the attacks, Russia ultimately bears responsibility for the victims in East Ghouta and countless other Syrians targeted with chemical weapons since Russia became involved in Syria.

In September 2013, Russia pressed for, negotiated and agreed to the framework for the elimination of Syrian chemical weapons – a diplomatic understanding between the United States and Russia requiring the verifiable destruction of Syria’s entire chemical weapons stockpile.

In so doing, Russia assumed responsibility as guarantor for ensuring that its Syrian allies cease all use of chemical weapons and fully declare its chemical weapons stockpile for destruction under international oversight.

The U.S.-Russia diplomatic framework was legally anchored by the United States and Russia in a decision of the Executive Council of the Organization for the Prohibition of Chemical Weapons and Resolution 2118 of the UN Security Council.

In addition, in March 2015, Russia supported the adoption of UN Security Council Resolution 2209, which emphasized that those responsible for the use of any toxic chemical as a weapon, including chlorine, must be held to account.

Russia has not lived up to these commitments. Since two thousand – April 2014, there has been mounting evidence that Syria continues to illicitly possess chemical weapons and use them against its own people.

The OPCW Fact-Finding Mission has confirmed multiple incidents of chemical weapons use in Syria, including the use of the toxic industrial chemical chlorine as a weapon. Some of these incidents, including the April 4th sarin attack, were later attributed to Syria by the OPCW UN Joint Investigative Mechanism, an independent panel of impartial experts established in August 2015 by the UN Security Council’s Resolution 2235, with the full support of Russia.

There is simply no denying that Russia, by shielding its Syrian ally, has breached its commitments to the United States as a framework guarantor. It has betrayed the Chemical Weapons Convention and UN Security Council Resolution 2218[1], and on these occasions has twice[2] vetoed UN Security Council resolutions to enforce the Joint Investigative Mechanism and continue its mandate.

Russia’s failure to resolve the chemical weapons issue in Syria calls into question its relevance to the resolution to the overall crisis. At a bare minimum, Russia must stop vetoing and at least abstain from future Security Council votes on this issue.

Over 25 like-minded countries are here today to ensure that those who use chemical weapons will be held accountable. France, the UK, Germany, Turkey, and many others are here today to uphold the Chemical Weapons Convention and its vision of a world free of these heinous weapons.

We will use this Partnership to facilitate greater information sharing about chemical weapons use, including sanctions information to collect and preserve such information and to strengthen the capacity of states to hold responsible parties accountable. This initiative puts those who ordered and carried out chemical weapons attacks on notice. You will face a day of reckoning for your crimes against humanity and your victims will see justice done.

We call on the community of responsible and civilized nations to put the use of chemical weapons to an end. The choice is yours. The people of East Ghouta are watching and the rest of the world is watching as well.