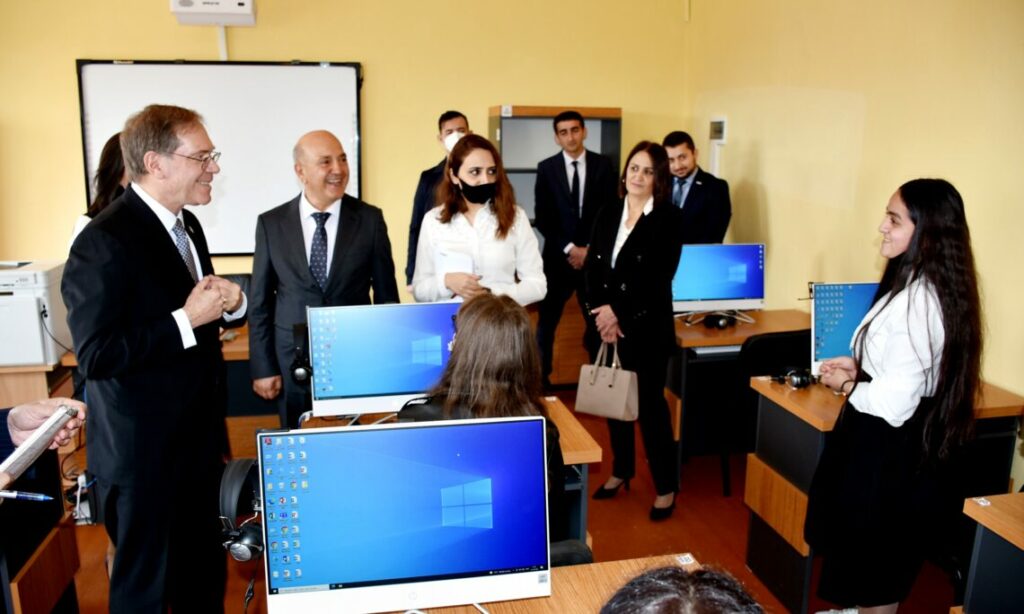 On March 31 and April 1, U.S. Ambassador Litzenberger traveled to Astara and Lankaran and participated in the opening of two computer labs funded by the United States Agency for International Development (USAID) at local educational institutions.  The computer labs, funded by USAID and implemented by the International Organization for Migration (IOM), include 21 new computers at Astara Pedagogical College and 17 computers at Lankaran State University for the use of students.

At Astara Pedagogical College, Ambassador Litzenberger greeted Director Aghababa Ibrahimov and Astara students who are using the USAID computer lab in the course of their studies. While at the subsequent opening at Lankaran State University, the Ambassador met with Director Natig Ibrahimov and Lankaran students who use the Lab.  Both Directors thanked the Ambassador, USAID, and IOM for their respective computer labs, and explained how the new computers are benefiting their students.

Explaining the purpose of USAID’s funding for these computer labs, Ambassador Litzenberger stated, “We want to do everything we can to help young Azerbaijanis become successful.  I see such potential in young people here, and I know that with only a little bit of extra help, they can achieve so much in the future.  That is why the U.S. Government is making an investment in Azerbaijani youth.”

As part of a $1 million, three-year project focused on strengthening the economic resilience of youth and women, USAID and IOM established five USAID computer labs at educational institutions in Azerbaijan in order to provide students with better opportunities to study information technology, computer science, and languages.  Along with these five computer labs, USAID worked with Azerbaijan State Agricultural University to launch a dual-degree program with Oklahoma State University in the United States, as well as a Technical Certificate Program in hazelnut production in partnership with Italian agricultural firm Ferrero.