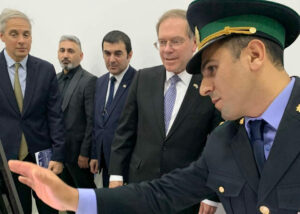 United States Ambassador Lee Litzenberger joined the State Customs Committee of the Republic of Azerbaijan Deputy Chairman Javad Gasimov and other customs officials for a tour of the equipment donated by the U.S. Department of Defense to the Azerbaijani State Customs Committee at the Astara border crossing point.  This equipment is one of several tranches of security assistance provided by the U.S. Department of Defense program since 2019.  The Department of Defense has committed more than $90 million to Azerbaijan’s counter illicit trafficking, border security, and maritime security efforts since 2019. The equipment the U.S. Ambassador reviewed during the tour at the Astara border crossing is valued at over $30 million USD to help the State Customs Committee secure Azerbaijan’s borders and stop the smuggling of illicit goods.

Ambassador Litzenberger delivered remarks during the visit and noted the U.S. Embassy’s twenty-year relationship with the State Customs Committee in countering proliferation of weapons of mass destruction and countering narcotics smuggling. Ambassador Litzenberger said, “It is my hope that this donation will be one more step in the 30-year relationship between our countries and will enhance our effectiveness in improving the security of Azerbaijan and the United States.”

“For 30 years we have worked with the Azerbaijani government and people on issues related to the rule of law, human rights, the economy, energy, and security.  Using equipment we provided like x-ray scanners and radars, Azerbaijan has successfully protected its energy infrastructure, and improved its capability to interdict smugglers of weapons of mass destruction and narcotics,”  Ambassador Litzenberger said.

Speaking at the Astara border crossing, the site of the majority of Azerbaijan’s drug seizures, Javad Gasimov, Deputy Chairperson of the SCC noted the role U.S.-provided equipment has played in the interdiction of drugs, weapons, and other contraband. Expressing gratitude to Ambassdor Litzenberger for America’s assistance, he said: “There is no other partner like the United States in the world; you are second to none.”

The U.S. Department of Defense contributes to capacity building with partners around the world to defeat the illicit trafficking of goods, people, narcotics, and weapons.  The U.S. European Command’s Joint Interagency Counter Trafficking Center and U.S. Drug Enforcement Administration work with the U.S. Embassy to support Azerbaijan’s interdiction operations and investigations to secure their borders and protect their populations from transnational threats, organized crime, and violent extremists.

The U.S. Department of Defense has been an active partner with the State Customs Committee and other border security organizations in Azerbaijan since 2002.  The donation of this equipment is one of several since 2019 to strengthen border security capabilities along Azerbaijan’s southern border and to assist the State Customs Committee in stopping the harmful impact of narcotics and other materials smuggled into or through Azerbaijan.