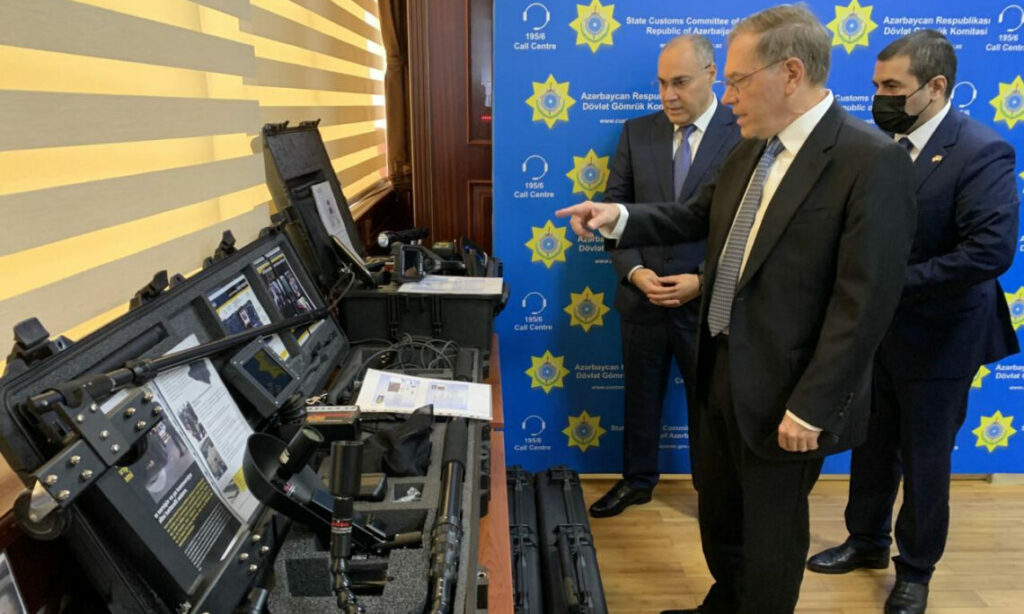 United States Ambassador Lee Litzenberger joined Azerbaijani Customs Committee Chairman Safar Mehdiyev and other customs officials at a ceremony marking the donation of mobile detection equipment to the Azerbaijani State Customs Committee.  The assistance is the first of several additional tranches provided through the U.S. Department of State’s Export Control and Related Border Security (EXBS) program in 2022.  Since 1999 EXBS has provided more than 25 million dollars of support, and this year the U.S. will donate equipment valued at over $250,000 USD to help Azerbaijan secure its borders and stop the smuggling of illicit goods.

Ambassador Litzenberger delivered remarks at the ceremony and noted the U.S. long-time cooperation with the Government of Azerbaijan in countering proliferation of weapons of mass destruction and illegal smuggling activities. Ambassador Litzenberger said, “It is my hope that this donation will be one more step in the 30-year relationship between our countries and will enhance our effectiveness in improving the security of Azerbaijan and the United States.”

“For 30 years we have worked with the Azerbaijani government and people on issues related to the rule of law, human rights, the economy, energy, and security.  Using equipment we provided like x-ray scanners and radars, Azerbaijan has successfully protected its energy infrastructure, and improved its capability to interdict smugglers of weapons of mass destruction and narcotics,” Ambassador Litzenberger said.

State Customs Committee Chairman Safar Mehdiyev expressed his gratitude for the donation and praised bilateral relations between Azerbaijan and the United States.  He noted that customs agencies from both nations have contributed to enhanced cooperation between the countries.

While specifically highlighting the Azerbaijani Customs Committee’s commitment towards international cooperation Chairman Mehdiyev expressed his gratitude for the U.S. support for Azerbaijan in various areas including training assistance to bolster the professional skills of Azerbaijani customs officers.  Chairman Mehdiyev noted important contributions and the role of customs authorities in dismantling illegal drug smuggling operations, and expressed hope for further cooperation between Azerbaijan and the United States.

The U.S. Department of State’s EXBS program is a world–wide initiative that seeks to prevent the proliferation of WMD commodities and the irresponsible transfer of conventional arms. EXBS assistance helps partner countries to meet their international obligations and commitments to UN Security Council Resolution 1540 and to adhere to the guidelines of multinational export control regimes.  The EXBS program is present in Azerbaijan as well as in 60 other countries. The program emphasizes that a strong border enforcement capability is an effective means to prevent criminal elements from pursuing their proliferation schemes.

EXBS has been active in Azerbaijan since 1999 and has provided many trainings, significant equipment, and technical support assistance.  This donation of mobile detection equipment is the first of several additional tranches of equipment on order.  This assistance will help Azerbaijan strengthen customs enforcement capabilities along Azerbaijan’s southern border and assist customs in dismantling smuggling operations.