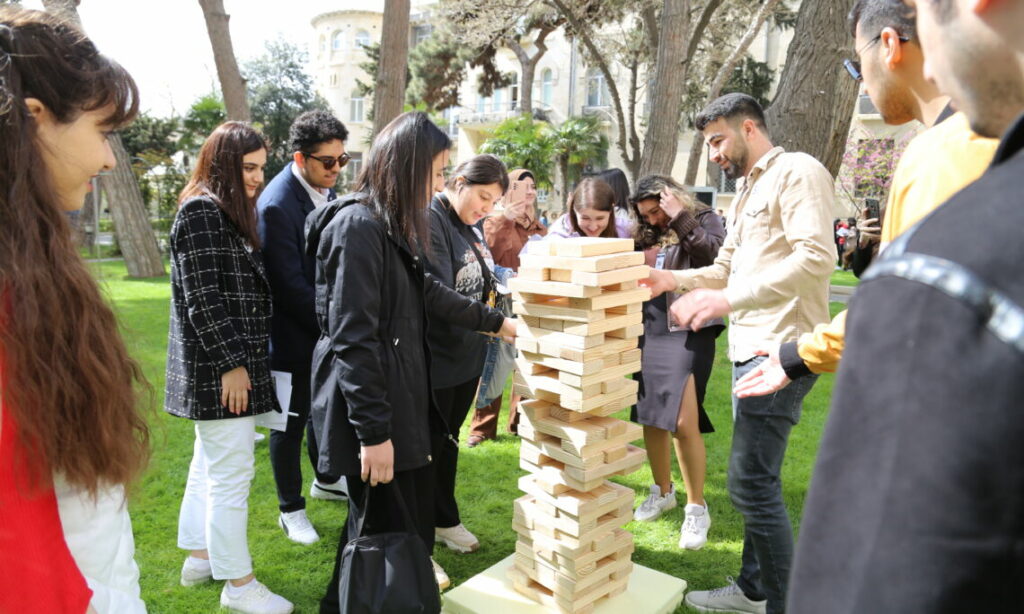 To mark the 30th anniversary of U.S.-Azerbaijan diplomatic relations and looking forward to the next 30 years of partnership, the U.S. Embassy Baku held an Open Day event for Azerbaijani university students and media.  The Embassy Open Day featured a series of installations managed by Embassy staff that highlighted past U.S.-Azerbaijan collaboration, opportunities for future cooperation, and mission priorities.

Guests met with Ambassador Litzenberger and other Embassy staff members and learned about U.S. government exchange programs and other opportunities for study abroad, as well as resources available at the network of American Corners the Embassy operates in Baku and six other Azerbaijani cities.  Visitors received information about student visas, jobs, and internships at the Embassy, and played yard games with the Embassy’s Marine Security Guard detachment.  They met the Embassy Green Team to learn more about Embassy environmental projects and viewed the Embassy’s new electric vehicle.  Students and press also met with women entrepreneurs assisted by a USAID-supported project and learned about how they could submit their community’s needs to a new e-oversight platform funded by USAID.  The State Partnership Program featured members of the Oklahoma National Guard, who are celebrating their partnership with Azerbaijan dating back to September 19th, 2002.

For 30 years we have worked with the Azerbaijani government and people on issues related to the rule of law, human rights, the economy, energy, and security.  As a friend of Azerbaijan, the United States is ready to help achieve peace and construct economic, transportation, and people-to-people connections to help the entire region prosper.

From all of us here at the Embassy, we wish you the very best for your careers and lives, and hope that you will study or visit the United States in the future – or maybe even join the U.S. Embassy team.  I know that you will play a very important role in Azerbaijan’s future.

The United States established diplomatic relations with Azerbaijan in 1992, at the time of its independence.  Secretary of State Baker visited Azerbaijan on February 12, 1992.  President George H.W. Bush announced the decision in a press statement on February 19, 1992.  The U.S. Embassy in Baku was opened on March 16, 1992, with Robert Finn as Chargé d’Affaires ad interim.

The United States and Azerbaijan work together to promote European energy security, expand bilateral trade and investment, and combat terrorism and transnational threats.  The United States is committed to strengthening democracy and promoting economic diversification in Azerbaijan.  The United States strongly supports efforts by Azerbaijan and Armenia to reach a peace agreement for regional stability, peace, and prosperity.