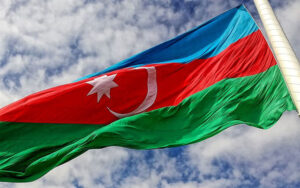 On behalf of the Government of the United States of America, I congratulate the people of Azerbaijan as you celebrate Republic Day and mark the 1918 establishment of the first democratic government in the Muslim world.

The United States values the thirty years of partnership with Azerbaijan on economic, energy, and security cooperation, and our ongoing dialogue on improving Azerbaijan’s respect for human rights and the rule of law.  We recognize Azerbaijan’s significant contributions to European energy diversification through the Southern Gas Corridor.  Strong institutions and processes that respect human rights and fundamental freedoms, rule of law, transparency, and accountability, are vital to us achieving our shared goals and building stronger and deeper ties.

The United States also values the connections fostered between thousands of Azerbaijani and American citizens through people-to-people exchanges, as well as through our Embassies’ public outreach.

As a co-chair of the OSCE Minsk Group, the United States remains committed to helping the sides negotiate a long-term political settlement of the Nagorno-Karabakh conflict and address the humanitarian impact of the fighting, including the release of all detainees, accounting for those missing, and the full and expeditious exchange of remains.