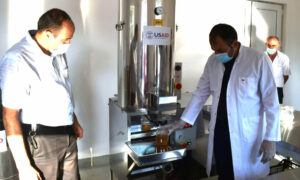 At today’s Fifth Conference on Community Development, the United States Agency for International Development (USAID) celebrated its decade-long partnership with the people and the Government of Azerbaijan in the context of USAID’s Socio-Economic Development Activity (SEDA).  The 10-year SEDA program has contributed to the strengthening of citizen participation and the partnership between citizens and public institutions to advance socio-economic development in the regions of Azerbaijan.  SEDA was funded by USAID and co­-financed by the Azerbaijani government, the latter through December 31, 2017.  East-West Management Institute (EWMI), a U.S.-based nonprofit organization, implemented SEDA in close cooperation with the Ministry of Economy of Azerbaijan.

Through SEDA, community members – supported by USAID – played an active role in identifying challenges to their communities’ development and worked together with local government and the private sector to address these problems.  Through SEDA, USAID has worked in six regions of Azerbaijan, supported capacity building in 177 communities, and developed and implemented 196 community-driven socio-economic projects.  In doing so, USAID cooperated closely with the Ministry of Economy, the Executive Committees, the municipalities and other public institutions, the private sector, and the communities themselves.

USAID is proud of the many achievements of the SEDA program.  Completed SEDA projects include:

According to Dr. Jaidev Singh, USAID Mission Director, “SEDA is the expression of the commitment of the American people and USAID to their friendship with the people of Azerbaijan and the Government of Azerbaijan.  USAID continues to support the Azerbaijani government’s engagement with citizens; assist the government to create a more diverse and durable economy; and utilize a development dialogue approach to establish the basis for a long-term partnership that serves both the Azerbaijani and American people.”

Mr. Hikmat Nabiyev, head of the Ministry of Economy’s Department for Regional Development, expressed his gratitude for the enhanced and enduring partnership between USAID and the Azerbaijani government that advanced the country’s development progress in regions.

Mr. Adrian Hewryk, EWMI President, explained that SEDA’s most important legacy is the strengthening of the dialogue between citizens and local government, which will improve social-economic welfare in these communities for years to come.