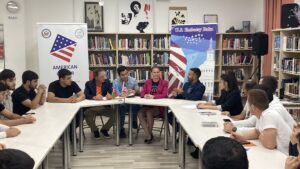 The United States Embassy in Azerbaijan is pleased to sponsor the visit of the American Wrestling Envoys John Smith & Sally Roberts visit to Azerbaijan from September 25 to October 3, 2022.  This program is under the U.S. Department of State’s Sports Envoy Program and in partnership with the Azerbaijan Wrestling Federation and Azerbaijan’s Ministry of Youth and Sports.

While in Azerbaijan, the American coaches will engage youth in a dialogue on the importance of leadership and respect for diversity through presentations.  The envoys will teach about how sports help develop leadership skills, which empower career success and art of positive coaching.  They will travel from Baku to Astara, Ganja, and Shamakhi to conduct wrestling clinics for young people and their coaches.

John Smith won six consecutive world championships as a competitor from 1987-92, including gold medals at the 1988 Olympic Games in Seoul and at the 1992 Olympic Games in Barcelona. Additionally, he owns five national championships as head coach of the Cowboys. Recently completing his 31st year, Smith accepted the head coaching position at Oklahoma State in 1992 and the numbers and accomplishments since that time speak for themselves. His list of awards and honors received befits someone who earned the distinction of being the best wrestler on the planet. Smith was honored as the first wrestler to ever claim the James E. Sullivan Award as America’s outstanding amateur athlete when he won the award in 1990.

He was the first American ever chosen as the Master of Technique and Wrestler of the Year by the International Wrestling Federation (FILA) when he received the honor in 1990. In 1992, he was presented with the Amateur Athletic Foundation’s World Trophy, becoming the first North American wrestler to earn the honor. A 2003 inductee into the FILA International Wrestling Hall of Fame, a distinguished member of the National Wrestling Hall of Fame and a 1997 inductee into the Oklahoma Sports Hall of Fame, Smith was recognized as one of the 100 Greatest Olympians of All Time at the 1996 Atlanta Games. That same year, Smith was inducted into the OSU Athletic Hall of Honor. Smith also successfully established a wrestling club that allows wrestlers from across the country to prepare and train for international competition.

Sally Roberts is a former elite wrestler and Combat Veteran and the Founder and CEO of Wrestle Like A Girl® whose mission is to empower girls and women using the sport of wrestling to become leaders in life.

Sally was a resident at the Colorado Springs Olympic Training Center for eight years during which time she was a Three-Time National Champion, a World Cup Champion, a Two-Time World Bronze Medalist, and an Olympic Alternate. She served six years in the Army as a Special Operations soldier where she volunteered for deployment to Afghanistan. Sally was also a member of the Army’s prestigious World Class Athlete Program and represented both the U.S. Army and Team USA in elite athletic competitions. Sally was the recipient of the 2016 Women in Sport Award on behalf of the United World Wrestling Sports Governing Body and the International Olympic Committee and was extremely honored to be named USA Wrestling ‘Woman of the Year’ for 2018. Sally is also a highly sought-after speaker and author. She spoke at the United Nations ‘Global Good’ Summit, was a guest speaker on Coldwell Banker’s Speakers Series on Portraits of What Moves Her: Overcoming Obstacles, and Sally and Wrestle Like A Girl were featured on Megyn Kelly’s Today talk show. Sally recently wrote Op-Ed columns for USA Wrestling entitled The power of engagement in State Sanctioning efforts for Girls Wrestling and United We All Rise; the Power of Unity and Collaboration in Sports.